Women are more likely to be subjected to more bullying, hateful, abusive and threatening language on various social media platforms than men. In a fascinating study from 2006, researchers from the University of Maryland set up a host of fake online accounts and then sent these into chat rooms. Accounts with feminine usernames received an average of 100 sexually explicit or threatening messages per day, whereas masculine names received 3.7.

This issue came to prominence last summer, when Caroline Criado-Perez, a prominent female journalist and activist in the UK, sustained a series of violent threats from Twitter trolls.

However, things aren’t all quite as they seem. Many were surprised, when, in January 2014 one of the two people convicted for sending menacing tweets to Criado-Perez was a woman.

Intrigued, we at CASM undertook a study to analyse how the words  ‘rape’, ‘slut’ and ‘whore’ were being used on Twitter. Aside from the astonishing volumes  -between 9 January and 4 February 2014 there were around 131,000 cases of slut and whore used in English from UK-based Twitter accounts – the most surprising thing was where they came from. After we trained a classifier to analyse the gender (read the full report here for the methodology) we found that women use these words almost as much as men. 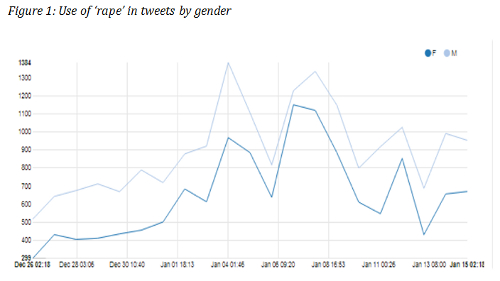 Both of the graphs above show that women appear to be as comfortable with using these words, which tend to be associated with misogyny, as men are.  From analysing the specific data sets, we also found that not only are women using these words, they are directing them at each other (both casually and offensively). Women are increasingly more inclined to engage in discourses using the same language that has been, and continues to be, used as derogatory against them.

Quite what this means is less clear: inferring meaning from words is a much more complicated task, which we plan on exploring in greater depth in a follow-up report. Context is everything, and that’s often lost on Twitter; through these processes of language manipulation, the nature of misogyny has been given a different undertone.

It is possible that people have become desensitised to this language through casual usage, while not realising the potential impact of these words in different contexts.

Whichever way you cut it, the fact that women use these words as much as men means this problem is more complex than it initially appears.