Barack Obama famously pioneered the use of social media as a campaign tool, to great effect. Demos is currently running a project to teach European third-sector organisations how to better use social media in order to improve turnout among under-represented groups.

So far we’ve found that the potential for social media to mobilise voters is there, but to date this has not been realised at European elections. We are confident that this year is going to be Europe’s social media moment.

The European Elections Study (ESS) examined how politicians tried to engage voters in 2009. The EES collected data on both candidates and voters and by comparing the two, we can see how effective politicians were back then in reaching potential voters through social media.

Our analysis shows that while politicians often were using social media, they were in fact only reaching a small proportion of the population, with little impact. We also found that they were mostly reaching voters through traditional techniques like flyering, which are actually quite ineffective in increasing turnout.

Candidates across all European countries were asked if they had used a variety of campaign techniques in order to engage potential voters. As the figure below shows, over half had used social media to try to get to voters. 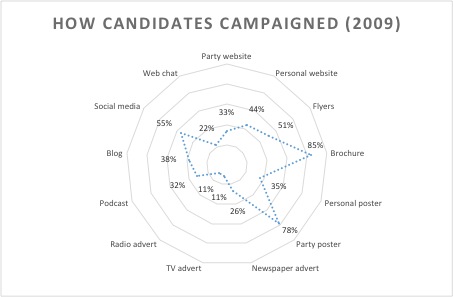 This story is told in the following figure, which compares social media with other campaigning techniques in six European countries: 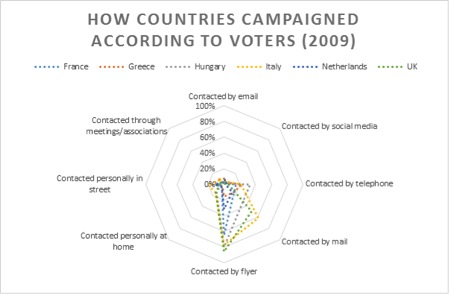 In short, politicians were using social media quite frequently but not really getting through to people.

What is most disheartening about these findings is that the techniques which are actually reaching voters are those with very limited efficacy, especially in getting out the vote. According to Green and Gerber in their book Get Out the Vote, the methods that actually convince people to come out and vote are those that involve some kind of personal touch and express social pressure to vote.

European politicians are trying to cast their net far and wide in the hope they will catch voters, but it seems they are using a net that is full of holes. So, might social media be used to better target and bring out voters?

Through forums like Facebook, potential sympathetic voters can be identified on the basis of what they ‘like’, which should enable politicians to more efficiently target their campaigns. Does this mean that social media might help to mobilise non-voters?

According to one study, it can, but it depends on the type of message put out. At the 2010 US congressional elections, Bond et al. put out two different types of message on Facebook to try and convince people to vote.

The first ‘informational’ message informed users of that it was election day, allowed them to seek information how to vote, and to declare if they had voted by clicking on a button. The second ‘social’ message did precisely the same thing but also showed Facebook users which of their friends had already voted.

It was the latter ‘social’ message that appeared to have an effect on turnout. This is a classic ‘nudge’-style approach: if people see their friends were voting, they are more likely to feel social pressure to vote and that in some way voting was worth doing. It was estimated that one single message on Facebook had contributed directly to turnout by 60,000 votes and a further 280,000 via social contagion.

Whether or not European politicians will be able to enact a social media campaign on the same scale as the Americans is doubtful, given differences in the amounts of electoral spending. Nevertheless, social media do offer the opportunity at these upcoming elections of better targeting, increased turnout as well as allowing candidates to interact more with voters.