Since the first Tweet was sent in 2006, Twitter has become the mouthpiece of almost 650 million users: a sizeable digital chorus with eyes and ears all over the world, providing a running commentary on almost any topic conceivable. These users have, through weight of numbers alone, qualitatively changed the nature of social media.

Every event now comes with a swarming cloud of Twitter comments and reports, which often is significant enough to impact – or even initiate – events far removed from the digital space they occupy. No longer merely a forum for opinion sharing – often lampooned as chaotic or trivial – Twitter is having an impact on events as they develop.

One of the most significant on and offline events of the last few months was the public response to the inquest into the death of Mark Duggan. On the 10th December 2013 the jury in his killing began deliberations that would span a month before their verdict of ‘lawful killing’ was delivered on the 8th January this year.

Duggan had been shot dead by police earlier in the year and the inquest was held amid controversy surrounding the case and the Metropolitan police more broadly. Twitter users followed the inquest, tweeting reports, voicing opinion and commenting on the process as it unfolded. We took a look at the tweets – over 200,000 of them – and in the emotions and opinions of Twitter users we found a fascinating interaction between Twitter and the ‘offline world’ with which it is so tightly entangled. 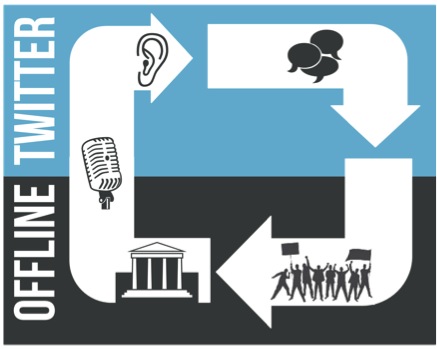 The deliberations of the jury in the inquiry were far longer than was expected, and in the hours that followed the verdict itself was shared some 33,000 times. Yet even more striking was the greater volume of tweets commenting on the verdict: 53,000.

Tweets condemning the actions of the police and the verdict were the most common – around 58 per cent of those ‘commenting’ – and centred on perceptions of institutionalised racism within the Met. Parallels were drawn with other famous cases of police controversy such as the death of Smiley Culture in 2011 and the shooting of Jean Charles de Menezes in 2005. Other tweets expressed confusion as to how a killing could be ‘lawful’ despite the jury concluding Duggan did not have a gun in his hand when he was shot.

A smaller number of tweets – some 17 per cent – suggested that justice had been done. Some suggested Duggan had been armed, and was known to carry a gun, vindicating the police marksman. Others suggested his lifestyle meant he had it coming, referring to claims Duggan was involved in drug dealing and gangs.

Another group of Twitter users called for calm in the wake of the verdict. Around 3,500 tweets (7 per cent) were sent suggesting that the verdict could cause repeats of the rioting seen in North London and elsewhere in August 2011. The tweets provide an unprecedentedly rich picture of the divided opinions held by Britons around Duggan’s killing and the subsequent inquest.

Finally, and perhaps most interestingly, these Twitter dialogues spawned and impacted on ‘offline’ events, bringing it full circle. This has been seen before, of course – the 2011 rioting had gained momentum and loose coordination through social media as a sense of police powerlessness spread quickly through social networks. Yet one particular event stands out as a case study in the way social media can build widely-owned ideas and coordinate action in real time.

On the 11th December – the day the jury was expected to deliver its verdict – an unrelated student protest was taking place in universities around London. This ‘national day of student action’ centred on the hashtag #copsoffcampus, in response to perceived police brutality at previous protests, as well as wider political themes of privatisation of education and student fees. The graph below shows the tweets that appeared in our sample: bear in mind that our dataset was limited to tweets relating to Mark Duggan. 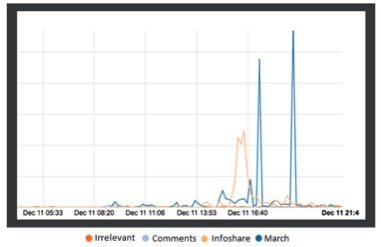 What is striking is the timing of the spikes. The pale orange ‘infoshare’ is the spike in Tweets announcing the beginning of jury deliberations at the Duggan inquest. Prior to this spike there is almost no mention of the march in relation to Mark Duggan. An hour or so after the news spread across Twitter, there are two great spikes of tweets linking the Duggan verdict to the #copsoffcampus demonstration.

Twitter brought these two movements together. It allowed them to merge in a space of a few minutes, and prompted a large group of students to march on the Royal Courts of Justice where the inquiry was taking place. Twitter has the power to very quickly shape offline events, completing the cycle mentioned above.

There’s a lot to digest here, which in itself is significant. The power of Twitter (and social media more widely) goes far beyond the red-and-green dashboards of marketing agencies and the raw numbers of followers and the followed. It is an unprecedentedly rich and complex source of public opinion, worthy of deep analysis, and credit must go to Twitter for making such a powerful source of social data freely available.

What we can see, ignoring proportions, is that many thousands of people slammed the verdict, with many assuming corruption and discrimination had driven the result. Over half the tweets sent express a sense of injustice. At best, the tweets suggested sections of the British population feel general discontent as to the people and processes that enforce justice in this country. At worst, the tweets reflect a feeling that problems of racism, obfuscation and self-servitude remain widespread in the police.

Theresa May’s announcement of an inquiry into allegations that the Met spied on the family of Stephen Lawrence, despite internal inquires by Scotland Yard and the IPCC, seems to highlight the lack of faith shown in internal police reviews. The report – published this month – appears to provide some justification for the unease.

It is also clear that the 2011 riots have scarred the public consciousness. Underlying individual opinion of the verdict is a sense of restless agitation that comes out strongly in the tweets and is expressed in different ways: sometimes threatened (#nojusticenopeace) and sometimes feared. It seems that whatever embers provoked and fuelled the riots are still smouldering.