£1.4 trillion. That’s the staggering figure attributed to the level of household debt in the UK. The average student now leaves university after three years with £20,000 worth of debt – before they have even got their foot on the first rung of the career ladder.

But describing debt in numbers alone overlooks the fact that there is nothing intrinsic to having a lot of debt that makes it harmful – and debts like mortgages and student loans highlight the limitations of measuring the depth of the debt crisis by size of debt alone.

Debt is only as bad as the harm that it causes, which is why the Demos report out today has created a ‘Harm Index’ measuring the impact of debt. It suggests ways that debt support should be tailored to the individual struggles individuals face, and also argues that lenders who cause the most harm face stronger penalties.

Comparing the ‘Harm Index’ scores and some other key stats for different debts paints a much more granular picture of the debt sector – from the point of view of borrowers themselves:

Almost two thirds of people polled had a credit card, which they often used without problem – reflected in their low score of only 28 out of 100 on our ‘Harm Index’. So long as they are paid off on time every month, people did not generally struggle to afford their credit card bills, and did not worry about them. 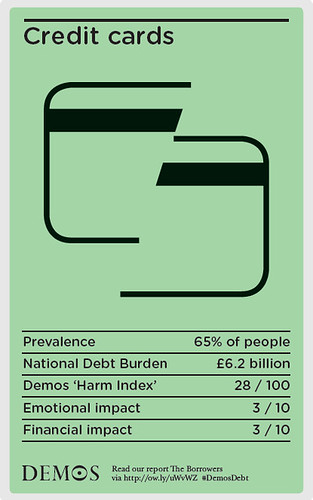 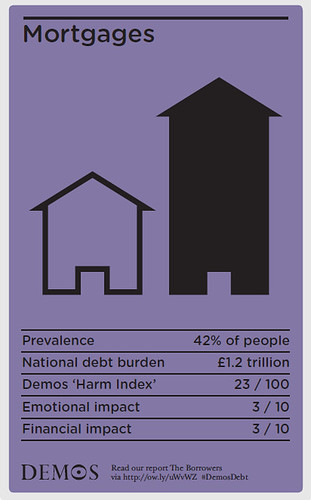 Like credit cards, mortgages are an everyday form of debt – and account for 86% of total household debt in the UK. Similar to credit cards again, most people make their repayments each month with no difficulty – in 2013, the number of repossessions was only 0.26% of all outstanding mortgages, and only 1.29% of mortgages were in arrears. They therefore do not represent much of a threat to peoples’ state of mind.

Below illegal lending, payday loans caused the most harm of any of the debts we surveyed people on, scoring 68 out of 100 – they were expensive, they stressed people out and offered very little flexibility (without the stressful repercussion of spiraling costs). Payday loans could be portrayed as the archetypal ‘harmful debt’. In spite of their high level of harm, they affect a relatively small number of people – only 1 in 20. 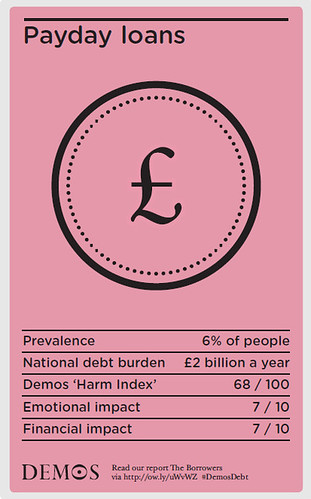 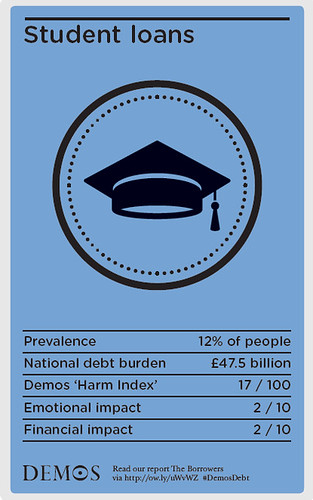 Student loans were ranked as the lowest impact form of debt, scoring only 17 out of 100. The reasons for this are manifest – of all the types of debt on the market, student loans are one of the only ones where repayment is inextricably linked to ability to repay. Automatic monthly repayments only begin above a certain income threshold (£21,000) and stop whenever a person dips below this income. Because repayments are deducted from monthly paychecks along with tax and National Insurance, it is almost impossible to miss a repayment – and the consequences of doing so are very small.

Arrears are a different type of debt – not often one that people choose, but normally one that they are forced into when they are unable to afford bill payments. Our survey showed that more than 1 in 10 people are behind on their council tax, owing a combined amount of £2.4 billion – more than the annual turnover of the entire payday loans industry. The harm they cause is also very similar to payday loans – they cause a lot of emotional worry (particularly through the number of threatening letters people received, and the use of bailiffs), and can quickly spiral and become unaffordable, forcing people deeper into debt. 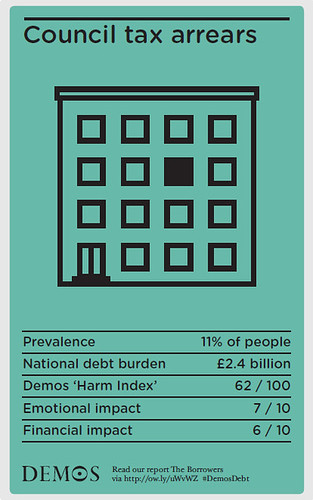 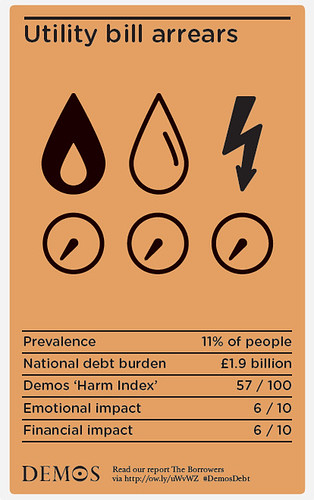 The number of people falling behind on utility bills is very similar to the number falling behind on council tax bills – roughly 1 in 10 – and like council tax arrears, people reported high levels of worry about the consequences of not paying their bills: risking having their gas and electricity supplies cut off. Both these types of arrears scored high on financial impact – perhaps reflecting the fact that people falling into arrears on household bills are simply not able to meet the costs of day-to-day living from their income, and so their ability to repay these debts is very low.

So what can be done to solve the harmful impact of debt? Next Tuesday the Financial Conduct Authority (FCA) takes over regulating the consumer credit industry, including payday loans.

Demos is calling for tougher financial penalties for lenders who cause the most harm via a proportionately higher levy to fund debt advice services. Not all debts are the same, and understanding the emotional and social harm that each specific form of debt causes is vital to getting a grip on Britain’s debt crisis.