Across Europe, anti-EU political parties are on the rise, and are expected to continue this trend in the current elections. One recent survey by YouGov put Britain’s UK Independence Party on 31 per cent while France’s Front National polled at 24 per cent.

It is well-known that trust in politicians and governments at the national level is in decline. But how is trust in European institutions – in particular the European parliament – changing over time?

To find out, I drew on data from the European Social Survey (ESS), where respondents from all EU countries were asked to rate how much they trusted the European Parliament on a scale from 0 to 10.

Perhaps predictably, in many countries within the European Union there has been decline in the level of trust placed in the European Parliament. Declines have been particularly pronounced in those countries that have been at the centre of the Eurozone crisis: Greece, Portugal, Cyprus, Spain, and Ireland, as evidenced by Figure 1. 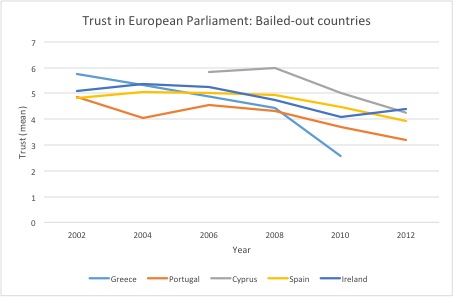 The most striking decline has been in Greece. In 2002 Greece ranked first in trust in the European Parliament among EU countries as measured by the ESS, with a mean score of 5.8. In 2010, this had collapsed to a mean score of 2.6.

Yet is not the case that decline is happening across the board. Some countries have demonstrated stability despite recent political turmoil within the EU – Denmark, Belgium, Finland, and the Netherlands – and Sweden even shows an actual rise in trust.

In the UK, not much has been lost by way of trust, but there was not much to lose in the first place: in 2002, average trust in the European parliament was at 3.6 while in 2012 it was at 3.4. In fact, Britain has one of the lowest levels of trust in Europe: nearly 17 per cent of Britons in 2012 had zero trust whatsoever in the European Parliament. 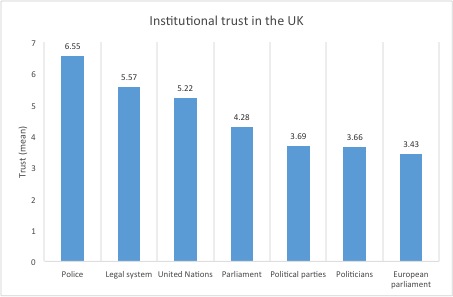 The European Union is facing a growing crisis with declining levels of trust in what is its most democratic institution – the European parliament. In the UK distrust is not evenly distributed. Regression analysis revealed that those who are the most distrustful are more likely to be male, white, older, Conservative, working class, economically insecure and fearful of immigration.

Elsewhere, I have shown how Britons tend to be among the least knowledgeable in Europe when it comes to the basic workings of the European Union. This begs the question: on what basis are the British forming their distrust?