We wake today into a new political dawn. UKIP has won their first Parliamentary seat, and very nearly got another. Commentators from all sides of politics are, on one point, agreed: this is a big moment, and it feels that the sands are shifting underneath the political status quo that has stood for decades.

But apart from the UKIP insurgency, another earthquake was rumbling under Westminster last night: social media. These new social-digital spaces have emerged as an important second front in politics – somewhere that the campaigns are desperately seeking to dominate, but also where ordinary people go to have their own say, and to answer the politicians back.

Tens of thousands of tweets flooded in about Clacton and Heywood and Middleton. At the Centre for the Analysis of Social Media at Demos, we’ve been developing technology over the last three years to listen to what they were saying.

This is what we found:

Twitter ignited: Around fifty thousand tweets in total from across the world: especially from the UK and the United States.

UKIP were out in force: Tweets are mainly produced by committed, galvanised minorities, and insurgent, anti-Establishment movements have the loudest home bases of all. UKIP, like the Scottish Yes Campaign, viewed themselves to be poised to make history – and were not afraid to say it, and to goad and taunt the Westminster old guard.

Carswell was key for Clacton: he was, by far, the most mentioned candidate over the last week. He featured in three times the number of tweets than his opponents combined. Clacton voters like Carswell personally, and this showed on social media.

Bickley was not key for Heywood: But UKIP’s candidate at Heywood, John Bickley was not a central figure in the social media debate. Bickley, by contrast, was a distant second to the eventual winner, Labour’s Liz McInnes.

It’s likely that Twitter will help fuel UKIP’s rise in the months leading up to the General Election. UKIP’s insurgent, anti-Establishment message will spread better than the more measured, typically, legalistic communications coming out of the mainstream parties.

They will use it to continue to gleefully puncture, in their eyes, the cosy complacency of business-as-usual politics and with Carswell, they now have one of the most digitally savvy MPs in the House. It’s also helping Ukippers feel that they’re part of a national awakening – if they can translate this to offline action, they’ll have a committed groundforce ready to fight in the main event.

But don’t take our word for it. Take a look at the data yourself – and see what you think is most significant. We’ve put it up so you can explore it as you wish. Just don’t forget to tell us (@carljackmiller, @akrasodomski) what you find. Heywood is here, Clacton is here. 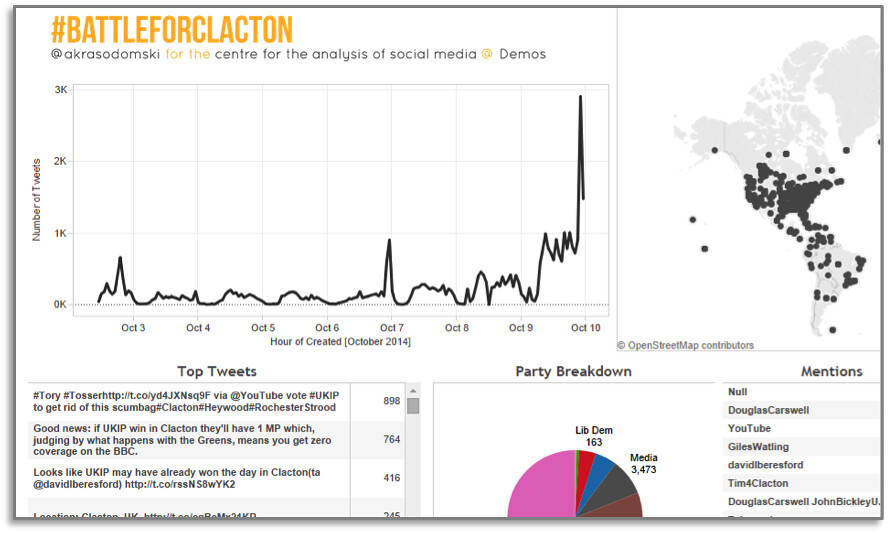