With thousands of offices across the country still and silent, workers across the nation are getting used to a new homeworking normal. No one could have predicted the circumstances, nor can we say how things will feel when we’re all free to return to our workplaces. Will it be the same? Will we want to go back? Are the days of the office effectively over? Demos asked these questions back in 1996: the days of a burgeoning telecommuting movement, where 30-50% of EU workers were classed as ‘computer users’, and we predicted the workforce could soon be replaced by a super-connected ‘WiredForce’.

Read Gerard O’Neill’s piece from ‘The new enterprise culture’ in August 1996 below:

Jane Fonda once quipped that ‘You can run the office without the boss, but you can’t run an office without the secretaries’. There are some who would now suggest that you can run the office without an office, though you might still keep the secretaries and even a few bosses. If the past ten years have been about the re-engineering of the factory floor to compete in a global marketplace, then the next ten years will be about the re-engineering of the office space to compete in a 24 hour marketplace. The ‘virtual factory’ is about to be joined by the ‘buildingless’ office.

Some estimates suggest that up to half the workforce in developed countries work in offices. That share has been steadily increasing over the past fifty years as first agriculture and then manufacturing saw huge declines in their share of total employment, with services taking up the slack.

From virtual factory to buildingless office

The office has played a key role in absorbing some of the consequences of de-industrialisation in the UK and many other European economies. But that absorptive capacity may now be at a limit, with profound consequences for the future nature of work. Writers on the economics of the office, such as Bruce Lloyd (1) have pointed out that one reason for the huge increase in the numbers working in offices over the past quarter of a century has been the extraordinary inefficiency of the office as a workplace. In other words, because the average productivity per office worker has been so low, many workers are required to achieve a given level of output. The office almost ranks with the proverbial ‘digging holes in the road and filling them up again’ in terms of productivity.

Think about it: they are usually only open for 8–10 hours per day, Monday to Friday, and not on Bank (or should it be ‘office’) Holidays. Those occupying the floor-space within the office are also likely to be on holiday from their desks on a further 20–30 days in the year. Offices also have to be depreciated against the balance sheet, whilst their appreciation as property can no longer be taken for granted in an oversupplied marketplace – even as you spend a small fortune on their maintenance, upgrading and compliance with a plethora of regulations.

Thus most offices are only effectively occupied for little more than 20 per cent of the year; an estimate that may err on the generous side if allowance is made for the time that all of us who work in offices spend gossiping, politicking, drinking coffee and reading newspapers.

So why is this all about to change as we enter the twenty first century? A quick run through of the STEEP (social, technological, economic, environmental, political) forces for change affecting office work will give you some idea of the complex and rapidly changing dynamics at play.

One of the key issues to emerge from the debate about the future of offices is the potential for tele-working. Coates & Jarratt (2) note that in the United States currently only 2 to 3 per cent of the workforce are engaged in telework, but that over the next fifteen years that share might rise to 25 per cent.

The October 1995 edition of Wired magazine contained an article on ‘The future of telecommuting’, presenting the views of five experts on work and telecommunications trends. The piece began by noting that by some estimates there are already 9.2 million telecommuters in the United States, i.e. employees who use networked computers and cellular phones to work outside the traditional office. The experts were all asked to give their views on the most likely year by which several of key telecommuting milestones might come to pass. The consensus among the experts makes for interesting reading (see Figure 1).

Thus it is expected that within ten years telecommuting will be commonplace, with one fifth of the US workforce becoming teleworkers. But how likely is it that the UK and Europe will follow the same path? There are obviously many critical uncertainties affecting the potential course of UK teleworking including:

All of these variables (and others than we have not listed) are liable to play a key role in the future direction of teleworking over the next ten years.

So how can we ‘call the future’ with regard to teleworking? In a recent study on teleworking prospects in Ireland (3) we identified the following two key axes relating to the future of teleworking:

By laying one axis on top of the other, we gave ourselves a ‘future map’ with which to explore the dimensions of teleworking’s future in Ireland or elsewhere (see Figure 2). 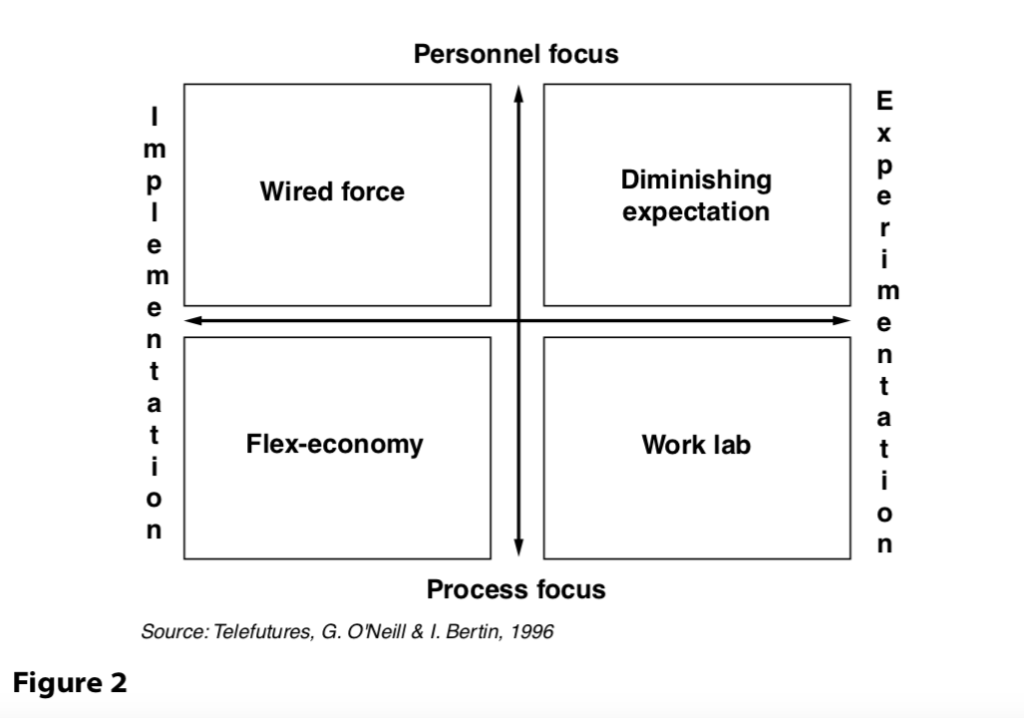 Each of the quadrants that this map gives rise to are in effect four different scenarios for the future of teleworking.

This could be said to be where teleworking is at present in the UK. In this scenario, organisations would only be committed to small scale experimentation with teleworking. Teleworking would still be driven by personnel needs, such as the retention of the services of key staff who want more flexible working arrangements, and the ad hoc use of teleworking to contain overhead costs while expanding the payroll.

Under such a scenario, the proportion of the UK workforce teleworking might rise from its present level of about 2 per cent (4) to 5 per cent over the next 10 years.

Given the slow and evolutionary changes in telework practice, we feel it appropriate to call this scenario ‘diminishing expectations’. We speculate that there would be widespread disappointment with telework should it only reach these levels.

A markedly different scenario is presented by Quadrant 2. Here the degree of commitment has matured well beyond the experimental phase characteristic of present practices. The emphasis is on implementation, driven by the desire to reap the benefits of (by then) nearly two decades of intensive investment in information technologies and knowledge systems – investment that gives employees the rich information resources they need to run self-managed teams and to serve customers on a sophisticated one-to-one basis. The focus on teleworking has remained on personnel in this scenario, but this time the emphasis is less on ad hoc responses to individual staff needs, and more on the systematic application of communication and learning tools to working practices. In short, the workforce is replaced by a ‘Wiredforce’.

The contrast with our first scenario is obvious. In many ways, the potential of teleworking is realised, and the practice of teleworking moves in from the fringe to become a mainstream business activity – raising the proportion of the UK workforce who are teleworking to as much as 15 per cent over the next ten years.

There is, however, another route by which teleworking might become a mainstream phenomenon. Current business emphasis on cost reductions and controls – coupled with a growing managerial ‘comfort’ with outsourcing – could result in a quantitatively similar but qualitatively different outcome to that in the second scenario.

In this scenario, the organisational commitment to teleworking is predominantly characterised by an emphasis on implementation, but the application of teleworking is focused on processes. Imagine an economy in which the labour force is divided into two unequal parts: the core (about twenty per cent of all workers) in long-term positions with an employing company; and the periphery (most of the rest) in short-term positions with a portfolio of companies. It is the apotheosis of the trend towards outsourcing: the creation of a ‘Flex-economy’ in which the greater parts of the resources (material, financial and human) that corporations use to create wealth are bought in on an ad hoc, just-in-time basis giving maximum flexibility and offering the potential to minimise costs.

In contrast to the ‘Wiredforce’, this scenario would see greater use of sub-contracted, self-employed workers, bringing in key skills when required. Joseph Coates has already identified this as the likely scenario for the United States. He speculates that ‘contingent workers’ as he calls them (those on temporary contracts and/or working for job agencies, many of whom are teleworkers) will account for over 40 per cent of the US workforce by 2010.

In our ‘Flex-economy’ scenario we speculate that there might be an even higher level of teleworking practice (perhaps as high as 20 per cent of the workforce) but it would be of a very different nature to that under the ‘Wiredforce’ scenario since a much larger proportion of the teleworkers would be contingent workers. The emphasis in a flex-economy on cost would also see an even higher proportion of teleworkers used for tasks such as providing customers with technical support and for telesales activities.

Our final scenario is characterised by an organisational focus on experimentation, but unlike the first scenario the focus of teleworking is on processes rather than on personnel. Teleworking is seen as one more tool in the business process re-engineer’s tool kit. Key economic sectors such as the information and communications technologies sectors will readily experiment with new forms of work and its organisation and management – but other, more traditional sectors, might ignore it.

In such a scenario, there is little prospect of teleworking becomeing anything like the widespread phenomenon described in Scenarios 2 and 3 (perhaps remaining at around 5 per cent of the workforce, as in Scenario 1). Rather, teleworking remains in the ‘Work-lab’, the focus of sometimes interesting, sometimes disappointing experiments in the re-engineering of work – but always on the margin and rarely the subject of mainstream attention. As with Scenario 1, there might be a sense of disappointment with the ‘fruit’ of ten years of teleworking endeavours between 1995 and 2005.

The future of offices

The scenarios I have set out above are not exercises in statistical forecasting, but are more akin to storytelling (the original meaning of the word scenario). And like all good stories they have their lessons for the attentive listener.

Ultimately, the office without an office might well prove to be a blessing without a disguise, even for those of us who still like to enhance our productivity with copious amounts of coffee, with gossip and with newspapers.